A downloadable game for Windows, macOS, and Linux

We can never truly escape the consequences of our actions. There is a facility in the New Mexico desert which exists as a monument to that fact. Uncover the reason for this place, and hope its many forms will stand strong against the test of time. Explore ruins. Listen to the wind. Speak with strangers.

It will be ten thousand years before this place is safe again.

Hi heather! I played your game for my video game creating class, New Directions in Virtual Space by lee tusman. here's the video i made of me playing the game! I really really enjoyed it https://vimeo.com/388318966

I'd watched a video recently that really reminded me of this game and, like, I am a bit overwhelmed after this. I don't know if this video would have affected me like it did if I hadn't played your game, and experienced this, first.

Edit: I checked and the version I had was from before the update that added the title and downloaded the new version and... well in the old version realising that the 'patterns' on the ground were maps of the world felt like an achievement in that version. Just a note rather than anything else.

Really lovely game, I especially love the way it is rendered.

Could you go into bit more of a detail as to how to achieve that look?

One of my favorite games of all time (Original War) used cutscenes that had the same style, but I never quite figured out how they achieved it. Here's an example (https://www.youtube.com/watch?v=-E6EXSCOVtU). Thanks, I'd love to know :)

Thank you for playing, I'm glad you enjoyed it!

The key is an ASCII shader on the main camera -- the game takes in pixels of different shades, determines which letter is closest in shade to that one, then puts that letter onscreen. Without the shader, the game actually looks pretty ugly! :D

Oh ok, thats really cool, thanks for letting me know :)

Really thoughtful and easy to pick up! Simply done, but with an immersive, engaging world and art style. I'm in love.

Thank you!! I'm glad you enjoyed it :D 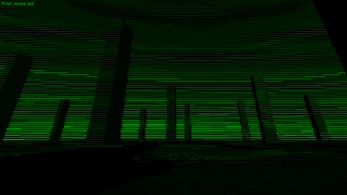 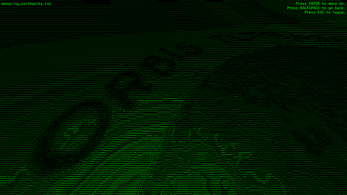 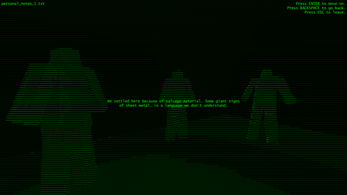 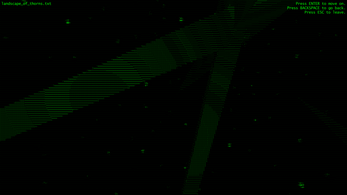 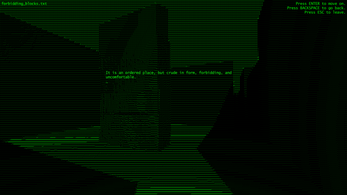